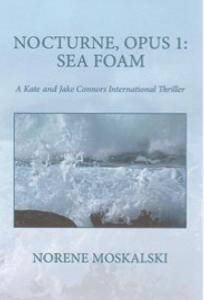 From Nocturne: “At first, Tara thought the clouding of her vision and the stinging along her eyelids resulted from the mixture of sweat, sunscreen and sea foam running into her eyes. Then the pain intensified to a fiery burn as the colonies of Bacillus nocturne embedded in the sea foam etched the surfaces of her eyes. Hungrily they began their search for the specific human proteins they had fed on in the polluted water of the bay.

The bacteria continued to navigate through the aqueous layers of her eyes, replicating as they absorbed the proteins scattered among their protective tissues. Blood pooled in the corners of her eyes as hundreds, and then thousands of rapidly multiplying bacteria swept across her lenses and eclipsed her vision.

Fighting through the excruciating pain, Tara struggled to turn her kayak around. Her fingernails gouged the soft wood of the paddle as she flailed it from side to side. Her splashes reverberated against the side of the kayak, and she lost all sense of direction. In desperation, she realized that her only hope was for the ebb tide to carry her back to the university’s pier. Terrified by the increasing pain, she slid down into the bottom of her kayak, her desolate cries for help the only sounds echoing across the marsh.”

Are you as scared as the editor is now?

Dr. Norene Moskalski, a retired university professor, is the author of Nocturne, Opus 1: Sea Foam, a fact-based, international suspense thriller about recombinant DNA, genetic tampering, and eco-terrorism. Nocturne is a story about justice and our struggles to correct injustice; it is a story about love and maintaining balance–balance in everything–our work, our families, our lives, and nature. Read more at goo.gl/Rlv4Js or NoreneMoskalski.com.

This ESWA author loves writing here and is determined to halt the loss of clean unpolluted water in our region. “We love the beaches, the history, the restaurants,” she said. “When we come to Lewes, we just feel like we’re on vacation. People are so welcoming and the atmosphere is so relaxed.”

Norene works hard at internet promotion of Nocturne. At the same time she is working on a follow-up in her specialty, eco thrillers. She is gaining fans by publishing other Delmarva novelists through her start-up company, Divinity Press. Nocturne itself can be purchased at http://www.NoreneMoskalski.com or found at Amazon.com.

She informed the editor that at least one of the old Coast Guard World War Two submarine forts at Bethany is gone. She’s a real fan of the shoreline there. “My dream is to have a house on the beach, but I’ll have to sell a few more books.”

2 thoughts on “Watch out for strange foam at the beach”